Jump to Content Jump to main menu Jump to footer

The Genesis of Spatial Audio

Since the advent of recorded sound, playback systems have been evolving towards a more lifelike experience. From early mono, to the invention of multi-channel systems like stereo and surround sound, acoustic scientists have innovated towards reproducing the enveloping quality of sound in the real-world. During the past decade, advancements in virtual reality fueled rapid progress in spatial audio technologies capable of rendering an immersive 3D sound field. In 2014, Waves Audio, the pioneering audio technology company with roots in professional audio invented Nx 3D audio.

Waves Nx was originally developed to solve a problem for sound professionals. With the rise of the laptop as an all-in-one recording studio, sound engineers and music producers were excited about the prospect of taking their work outside of the studio with headphones. One obstacle remained: while recording studio speakers project an ideal sound field in acoustically designed spaces, conventional headphones produce sound in the non-acoustic space inside of the head. With Nx, Waves invented a sound reproduction system for headphones that uses psychoacoustic science to externalize sound, to produce a speaker-like, expansive 3D listening experience. 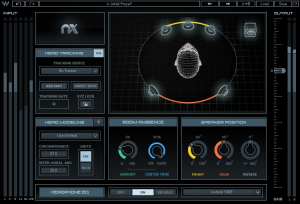 On Nx, 8 virtual speakers surround the listener. Multi-channel sound, including stereo, 5.1 and 7.1 surround sound, is “binaurally rendered”, meaning processed and delivered through two channels, into a virtual, precision-tuned listening space defined by a map of room reflections. These reflections are the essence of reverb and cue the mind into perceiving the size and character of a room. But this is just part of the science. Human hearing has evolved over millennia to pick up subtle spectral and temporal differences using the anatomy of the ear, head, and shoulders to localize sound in space. Nx employs models of these human hearing filters for each ear to activate the perception of sound in 3D. In addition to human hearing modeling, another factor is integral to the perception of sound in 3D space: head movement.

In the real-world, as we move our heads in response to a need to localize sound, our human hearing filters continuously adapt to our head and body position to maintain accurate perception of sound positioning. On conventional headphones, head movement while listening to music or a movie, for example, results in the whole sound field moving with the listener. This creates a cognitive disconnect that disables our ability to suspend disbelief and perceive a life-like audio experience. Recognizing the importance of the headtracking factor, Waves made high resolution headtracking integral to the Nx experience. Headtracking anchors the sound field relative to head position.

The Next Level in Spatial Audio Realism

The trifecta of 8-speaker virtual acoustics, human hearing modeling, and headtracking come together to deliver the complete Nx experience. Millions of people have already enjoyed Nx immersion on best-in-class headsets from HyperX, Audeze, and 1More, and rendered through laptop speakers on PCs from Dell. Now, with advancements in headtracking technology from Waves R&D, a whole new Nx experience awaits. The next level in spatial audio realism: Nx for Android mobile devices on earbuds with Moving Reference, dual-sensor headtracking.

With a mobile device, the simulation of localizing sound in space becomes more complex due to the additional variable of body movement. On headsets, Nx performs headtracking by using data from a single embedded sensor called an inertial measurement unit (IMU). On the IMU, tracking is always relative to a directional reference that determines what is forward. From that “heading reference”, Nx can extrapolate the positioning of the 8 virtual speakers around the listener’s head. The single sensor design is great for listener’s in a fixed position, but if the listener is in motion, like a runner making a turn on a jogging path, the IMU’s heading reference will remain locked even if the listener’s body moves in a new direction.

Imagine taking a run while enjoying the music of a piano trio on a headset with a single IMU sensor. In a piano trio, the piano is in the center with a violin on the left, and a cello on the right. You decide to take a left turn down a perpendicular pathway. As you make your left turn you find the cello has moved behind you, the piano is now in your right ear, and the violin is centered. This is a perceptual disconnect — the expectation is that the piano should remain centered. 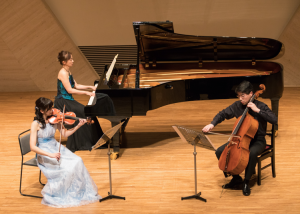 To solve this conundrum, Waves invented and patented a sound field anchoring technology called Moving Reference headtracking. Moving Reference is a patented dual-sensor algorithm through which movement is continuously tracked and calibrated to keep the sound field centered and in front of the listener. The first sensor, embedded on earbuds, tracks head movement across the three axes, yaw, pitch, and roll. Data from a second sensor on a mobile device is used to maintain directional reference, in other words, to tell Nx where the headtracking is relative to forward. The dual sensors enable Nx to distinguish between rotations of the head vs. rotations caused by motion of the listener’s body. 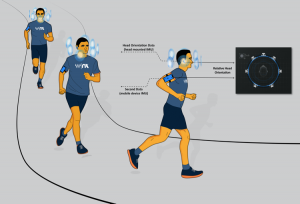 When the user is inmotion, for example taking a turn while jogging, on a bus turning a corner, or on a banking plane, the Moving Reference headtracking processes the data from both the earbuds and mobile device IMUs to maintain the centered perspective. The second sensor is constantly checking for changes in direction, and when the directional pattern changes, the headtracking is recalibrated. Significantly, the direction the mobile device itself is facing is irrelevant. For example, a smartphone can be placed in the listener’s pocket without influencing the Moving Reference calculation. 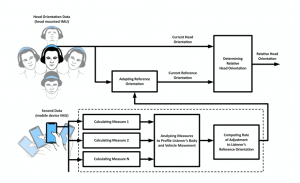 With Moving Reference headtracking, Waves Nx for Android mobile devices on earbuds allows listeners to suspend disbelief and enjoy a lifelike immersive 3D audio experience even while in motion. Technology demos are available now and the solution is ready for deployment today.

With Moving Reference headtracking, Waves Nx for Android mobile devices on earbuds allows listeners to suspend disbelief and enjoy a lifelike immersive 3D audio experience even while in motion. Technology demos are available now and the solution is ready for deployment today.

New spatial audio experiences are popping up on earbuds, headsets, and speakers. This brief FAQ will help make sense of this exciting, and occasionally confusing technology.
#New Blog
Go to Website

The magic of pure and amazing sound is within reach of electronics OEMs.
#New Blog
Read More

We have updated our Privacy Policy. We encourage you to read it as it explains how we collect and use your data. For more information, click here.

By continuing to browse this site, you are agreeing to the use of cookies for statistical and advertising purposes, as well as to facilitate information sharing on social networks. To find out more and change your cookie settings, click here.

We have updated our Privacy Policy. We encourage you to read it as it explains how we collect and use your data. For more information, click here.

When you visit any web site, it may store or retrieve information on your browser, mostly in the form of cookies. Control your personal Cookie Services here.